NOTE: MakeMKV is a shareware program, that will block itself after a trial of 60-days. To reset this trial, just reinstall it (even if there are others solutions).

If you are looking to make digital backups of your favorite Blu-ray movies, you can find few better tools than MakeMKV, a freeware video transcoder that is quick and easy to use. Like HandBrake, MakeMKV is available for Windows, Mac, and Linux. However, unlike HandBrake, it includes its own set of decryption tools. Here’s how it works.

Before Rip a Blu-ray, Rip off All Blu-ray Protections

Hollywood wants you to buy its movies on Blu-ray disc, but then it wants to control what you do with them once you get home. And the most frequently used method is so called Blu-ray protections.

Take BD Plus as example. BD+ is a component of the Blu-ray Disc Digital Rights Management system. It was developed by Cryptography Research Inc. and is based on their Self-Protecting Digital Content concept. Its intent was to prevent unauthorized copies of Blu-ray discs and the playback of Blu-ray media using unauthorized devices.

If you just want personal use of Blu-ray backup, then it is not involed in Copy-right stuff. Rip a Blu-ray, the first step to rip off all Blu-ray restrictions.

The second procedure of ripping a Blu-ray is TRANSFER

Thanks to the increasingly storage growth of computer hard disk, optical disc is no more the only medium storage to contain Bluray content. You can easily save 100+ complete Bluray movies on 1TB hard disk to enlarge your Blu-ray collection without tediously large pile of Blu-ray discs.

Disclaimer: In order to let you make copies of your Blu-ray movies, MakeMKV uses built-in decryption tools that circumvent digital rights management technology. Such procedures currently occupy something of a legal gray area. You probably won’t face any legal consequences if you rip your legally purchased Blu-ray movie collection for your own use, but we’re just going to present the instructions and let you decide for yourself whether to follow these steps. Heelpbook is not responsible for any damages that result from this how-to.

1. Download and install MakeMKV (you’ll find a mirror link for MakeMKV even at bottom of this article, hosted on HeelpBook). The program is completely free during the beta-testing phase, but that may change when the final release is available, so get the software while you can.

2. Put a Blu-ray movie into your PC’s Blu-ray drive, and click the Blu-ray button in the middle of the screen. 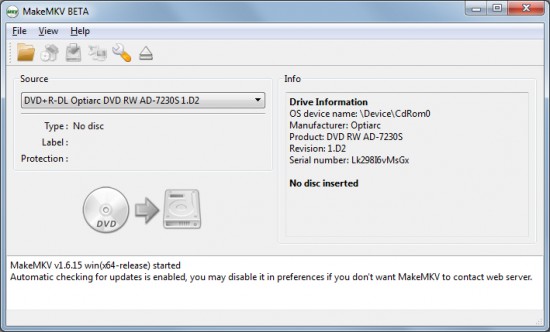 3. MakeMKV will scan the disc to identify the titles to rip. The program will now start removing the protection on the disk enabling you to rip it. 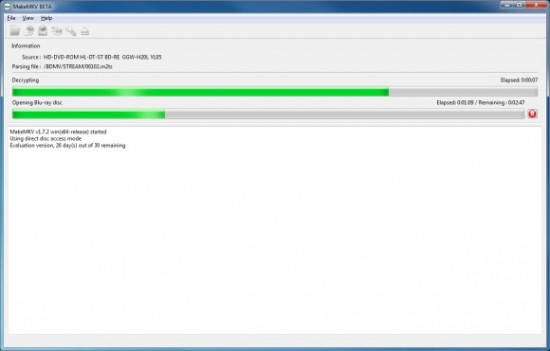 Once that has finished (approx 30 secs to 1 min if that depending on your system specifications) you will be presented with the next window that will ask you what parts of the disk you want to copy. All of the boxes are checked by default, which means that the program will create a single MKV file that will include everything on the disk including trailers, multiple subtitles etc.

If you want only the main title/movie, so you’ll have to uncheck all of the others and only checked the biggest file which will be your film. 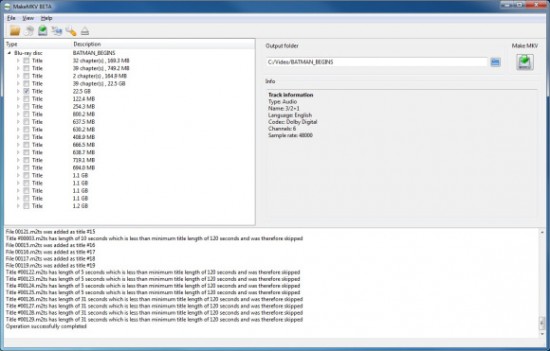 Before you move on though, if you click on the arrow next to the title that you have selected to rip, it will present you with more information contained within that title, like audio and subtitles. Bluray subtitles and especially audio files are a lot bigger that DVD ones as the sound quality is far superior on a bluray than it is on a DVD.


[tweet]
Now if you don’t need to have subtitles in multiple languages, or additional audio in other languages so you will uncheck those as well. That now brings the outputted file down of several gigas. As we said, the audio on blurays is bigger than the ones you’ll find on a DVD. 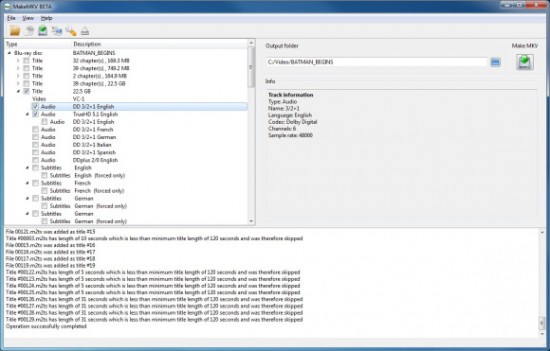 4. When the software is done, select the location for your movie in the Output Folder menu box, click Make MKV, and wait. Expect an average Blu-ray disc to take at least 30 minutes to rip to your hard drive.

Hit Yes, and it will start to rip. 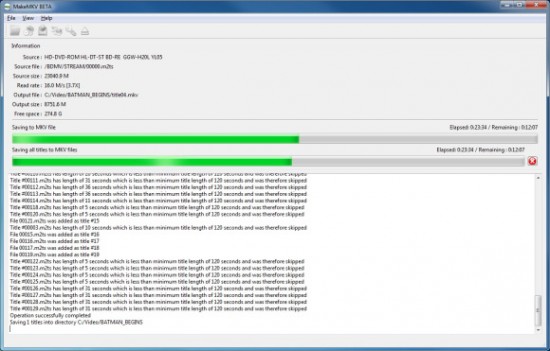 The program is pretty memory intensive, but it won’t cripple you computer, but may, depending on your spec, slow it down as it’s working. If you only have a small amount of RAM then the conversion process will be slow. It took approx 35 minutes for an avarage computer, PC or Mac, to rip the Bluray that has 4GB of RAM currently. A DVD would be a lot quicker.

After a while, the program will let you know that the ripping process has finished and your file is ready to be watched.

That’s pretty much it! MakeMKV undoubtedly offers one of the easiest ways to rip a Blu-ray disc, and it’s a great tool for beginners who may be new to Blu-ray video transcoders.

How can i play Matroska files on my PC or Mac?

Being aware that the output file is in the MKV (Matroska) file format, and it won’t play just anywhere. This compact file format is about 40 percent smaller than a traditional Blu-ray data disc, but playback demands a media player that is capable of handling MKV files.

Try Videolan’s VLC Player if you don’t already have it installed. For Linux PCs, as well as for MacOSX and the X-Box emulation you have to get the newest version of VLC or mplayer. On MacOS X you can also install Perian which will add Matroska support in Quicktime.

What if the process stops or MakeMKV doesn’t create the MKV?

If MakeMKV decides to stop mid ripping, try the following:

What file extensions does Matroska use?

There are currently 4 different extensions specified :

.mkv: Used for video files, as well those containing audio (movies) or video only
.mka: Used for audio only files, can contain any supported audio compresion format, such as MP2, MP3, Vorbis, AAC, AC3, DTS, or PCM.
.mk3d: For files with stereoscopic (3D) video.
.mks:Used for Subtitles that an ‘elementary‘ matroska stream.

To download the attachments of this article you’ll need to be registered and logged on. Sorry for the inconveniencce.
[wpfilebase tag=”file” id=149 /]