It is possible to use the Directory .NET Framework class from the system.io namespace. To use the Directory class to create a new folder, use the CreateDirectory static method and supply a path that points to the location where the new folder is to reside. This technique is shown here.

When the command runs, it returns a DirectoryInfo class. The command and its associated output are shown in the image that follows.

Another way to create a folder is to use the Scripting.FileSystemObject object from within Windows PowerShell. This is the same object that VBScript and other scripting languages use to work with the file system. It is extremely fast, and relatively easy to use.

This command and its associated output are shown in the following image. 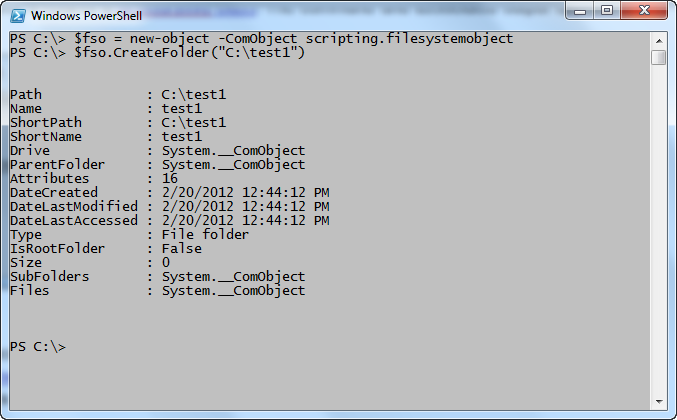 It is also possible to use native Windows PowerShell commands to create directories. There are actually two ways to do this in Windows PowerShell. The first way is to use the New-Item cmdlet. This technique is shown here.

Compare the output from this command with the output from the previous .NET command. The output is identical because the New-Item cmdlet and the [system.io.directory]::CreateDirectory command return a DirectoryInfo object. It is possible to shorten the New-Item command a bit by leaving out the Path parameter name, and only supplying the path as a string with the ItemType. This revised command is shown here.

Some might complain that in the old-fashioned command interpreter, cmd, it was easier to create a directory because all they needed to type was md –– and typing md is certainly easier than typing New-Item.

The command and its associated output are shown here.

You can see from the image above that the md function also returns a DirectoryInfo object.