To fully leverage the power of Windows PowerShell, you need to know how to use a foreach loop to iterate through collections such as a string array or a list of Windows services. PowerShell provides two types of foreach loops: the foreach statement and the ForEach-Object cmdlet. Although you can obtain the same results with both types of loops, they differ in several important respects.

But, before approaching these types of iterations, we need to know better how arrays can be manipulated in a Powershell session. Let’s begin viewing how to create a simple static array and we will note the type System.Array:

However, if we try to Add or Remove items to the array we get errors that the “Collection was of a fixed size“: 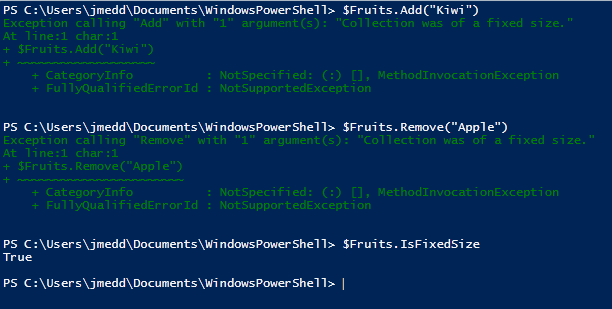 We can see that the array we originally created is of a fixed size. Note that it (a System.Array object) supports the modification of existing elements, but not the addition or removal of others.

One way to deal with this is to use a System.Collections.ArrayList instead:

Now if we try the previous add and remove methods we are successful:

Alternatively, if we had stuck with the original Array object we could do the following to ‘add‘ an item to it. (Actually it creates a new array with an additional item):

However, we can’t remove items in this way:

We could instead do this:

Taking your initial array you can convert it to a System.Collections.ObjectModel.Collection like this, which may be easier to remember than using the full type name of either a collection or array list:

Now we can add and remove items using the Add and Remove methods: 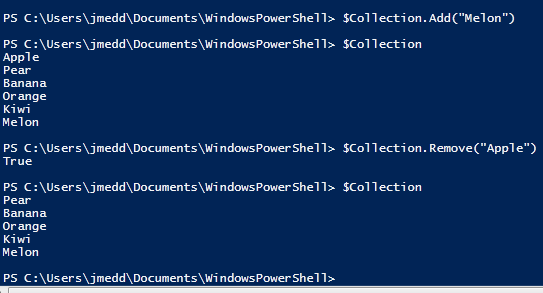 Now that we have seen how arrays can be managed in Powershell and the main difference between the Array object and the ArrayList object, we can go forward with ForEach loops.

Let’s take a look at an example to see how this works. The following command declares the $birds variable and initializes it with a string array, then uses the variable in a foreach statement:

The foreach statement begins with the foreach keyword, followed by a set of parentheses that enclose three components ($bird in $birds).

The element variable holds the collection’s current value as the statement loops through the collection. For example, the $bird variable’s value is owl in the first loop, crow in the second loop, and so on.

The second component in the parentheses is the keyword in. Use this just as is. The third element is the collection itself, which in this case is accessed through the $birds variable.

Next comes a set of braces. The braces enclose the script block that executes whenever a loop runs. In this example, the block contains only one statement — “$bird = ” + $bird.length — that creates a simple string, which is output to the console.

In this code, the $bird variable retrieves the collection value, and the Length property retrieves the number of characters in that value.

The command returns the results:

Although this example includes only one statement in the script block, you can include as many statements as necessary. For example, here’s a script block that contains three statements:

The second statement creates the string and outputs it to the console, as you saw in the last example. The third statement is a Write-Host cmdlet, which simply adds a blank line to the output.

This code uses $count within the outputted text. In this case, the value in $count is 5. This is the value assigned to that variable during the last loop, as shown in the results:

Although the preceding commands assign the collection (a string array) to a variable, you don’t have to take this approach. You can define your collection directly within the foreach statement, and you can define a collection made up of other object types, as in:

In this code, the third component in the parentheses is Get-Service. This cmdlet returns a collection of objects, one object for each service on the local machine.

Next, foreach uses $svc to access the service object’s CanStop property, which returns a Boolean value that specifies whether the service can be stopped once it has started. Finally, the foreach statement calls the ToString and ToUpper methods to format that value.

Note that when you reference an object’s methods and properties, their names are case insensitive. For example, you can call the ToString method by using letters that are all lowercase (as we’ve done in previous examples), all uppercase, or mixed case.

Whenever you define a collection in a foreach statement, you’re basically implementing a pipeline. In the example just given, the pipeline is made up of the output from the Get-Service cmdlet. However, you can implement more complex pipelines, as in:

In this command, the output from Get-Service is piped to the Where-Object cmdlet (referenced by the where alias), which limits the values returned by Get-Service to only those service objects whose Status property value is running. The Where-Object cmdlet uses the built-in $_ variable to access the current value in the pipeline. Figure 2 shows sample results returned by this command.

As you can probably deduce, including the entire pipeline within the parenthesis could get a bit unwieldy. A better approach might be to assign the service objects to a variable, then call that variable in a foreach statement, as in:

As you can see, the foreach statement uses $svcs to call the collection. This command returns the same results as those returned by the previous command.

You’ve seen how to use a foreach statement to step through a collection, but that’s not the whole story.

PowerShell also includes the ForEach-Object cmdlet—and to keep things interesting, foreach is the name of the built-in alias used to reference that cmdlet.

The ForEach-Object cmdlet receives a collection from the pipeline and loops through that collection just like a foreach statement. For example, the following command returns the same results (shown in Figure 2) as those returned by the previous two commands:

The implication of this difference between the foreach statement and the ForEach-Object cmdlet is that, instead of defining an element variable, you use the $_ built-in variable. Otherwise, the rest of the script block is the same as the preceding two examples. (Note that you must place the opening brace on the same line as the foreach alias; otherwise PowerShell treats the first line as a complete statement.)

PowerShell supports another alias to reference the ForEach-Object cmdlet: the percent (%) sign. For example, the statement:

Returns the same results as the preceding example, except that it uses % rather than foreach.

Although you can use the foreach statement or ForEach-Object cmdlet to return the same results, there are several differences between them. First, as you have already seen, the cmdlet is a little simpler because you don’t have to create a special element variable. Instead, you use the $_ built-in variable.

The Sort-Object cmdlet (referenced by the sort alias) sorts the output in the pipeline in descending order, as Figure 3 shows.

Another advantage of the ForEach-Object cmdlet over the foreach statement is that the cmdlet supports three types of script blocks, as shown in the code:

The first script block assigns 0 to the $count variable. This variable tracks the number of elements in the collection. The second script block retrieves the Name and CanStop property values for each service and increases the $count value by 1. The third script block prints a message that includes the total number of services, based on the last value in $count.

When you include three script blocks in this way, PowerShell runs the first block before the first loop, runs the second block one time for each loop, and runs the third block after the last loop. If you refer to Figure 4, you can see how the last script block displays a total number of services.

The foreach statement and ForEach-Object cmdlet provide powerful tools for working with collections. You can use either one to create loops that execute a set of statements for each element in a collection.