If you have a program you use regularly on Linux desktop, you may want to create a "desktop shortcut", so you can launch the program by simply clicking on the shortcut. While most GUI programs automatically create their desktop shortcut during installation, GUI programs built from their source or terminal applications may require you to set up associated shortcuts manually.

A desktop shortcut is represented by a corresponding .desktop file which contains meta information of a given app (e.g., name of the app, launch command, location of icon file, etc.).

Create a Desktop Shortcut From the Command Line

Besides manually create .desktop file, there are various desktop-specific ways to create an application shortcut, which we are going to cover in the rest of the tutorial.

In GNOME desktop, you can use gnome-desktop-item-edit to configure a desktop shortcut easily. 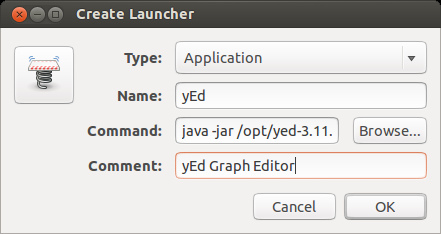 In this example, gnome-desktop-item-edit will automatically create a desktop launcher file in ~/.local/share/applications. To customize icon location and other info, you may have to edit the .desktop file manually afterward.

If gnome-desktop-item-edit is not available (e.g., on Ubuntu), you can install it as follows.

First right-click on kickoff icon located at the left bottom corner of your desktop, and then choose "Edit Applications" menu:

Click on an appropriate category (e.g., "Utilities") under which you want to create a shortcut, and click on "New Item" button on the top. Type in the name of the app:

Finally, fill in the meta information of the app being launched by the shortcut.

If you are on Xfce desktop, right-click on the desktop background, and then select "Create Launcher" menu. Then fill out the details of the shortcut: 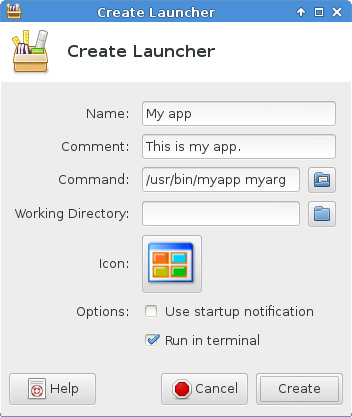 If you are on Linux Mint Cinnamon desktop, you can create an application launcher by right-clicking on the desktop background, and selecting "Create Launcher" menu. 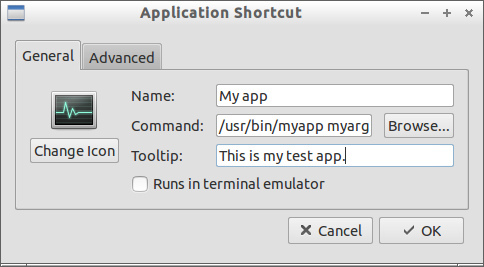