Let's say that you want to quickly create a table from an existing table in another database. If you are using SSMS (SQL Server Management Studio), you know the quickest way to do this is to right click on the table and “Script Table As”, “Create To” and “New Query Editor Window”. When this is done, you would expect a clean create table script, with defaults, primary and foreign keys, but instead you could receive the following:

Why aren’t all the columns created in the initial “Create Table” statement? The answer lies in how the columns were initially added to the originating table.

When using SSMS to create objects, certain ANSI settings are set on the connection to the server. To view these ANSI settings, navigate to “Tools”, “Options”, “Query Execution”, “SQL Server” and finally “ANSI”. 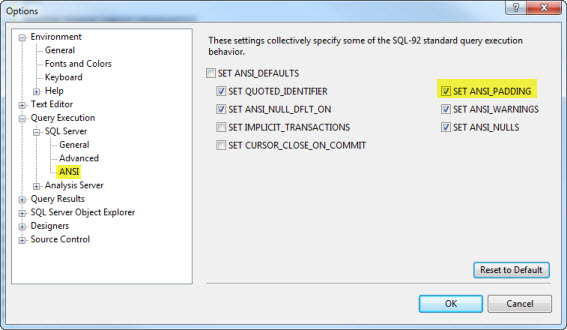 So, by default, “Set ANSI_PADDING” is set to ON for all connections to the server opened via SSMS.

One problem is that not all tools are nice enough to set these options for you automatically. If, for example, we used SSMS to create this table initially:

Then as we add more columns to Table1, another tool is used to add the columns col7, col8, col9 and col10. This tool though doesn’t set the ANSI_PADDING to ON by default.

After a while, more columns need to be added. This time the tool used to add the columns is SSMS and the defaults haven’t been changed. So ANSI_PADDING is turned on for the connection.

Now when you generate the “Create Table” statement from SSMS, you will get the broken up statement with ANSI_PADDING ON for some columns and ANSI_PADDING OFF for others. You can verify the ANSI_PADDING setting for each column by issuing the following statement:

But col9 and col10 were added on the same connection so why is there ANSI_PADDED set to ON? A quick glance at Books Online (BOL) states: SET ANSI_PADDING is always ON for nchar and nvarchar. SET ANSI_PADDING OFF does not apply to the nchar or nvarchar data types.

So nchar and nvarchar will always be created with ANSI_PADDING ON.

First off, we need to understand what ANSI_PADDING is doing.

When ANSI_PADDING is set to ON:

When ANSI_PASSING is set to OFF:

Obviously, before you make any change you will want to test your applications for any issues with string manipulation or comparison on the columns affected columns.

How do we fix it?

Typically, a simple Alter Table <Table> Alter Column <Column> statement with the ANSI_PADDING ON set on the connection will do the trick.

If your SSMS doesn’t have ANSI_PADDING set to ON by default, you will need to turn it on for the connection:

Then run the alter statement for each of the columns you want to change:

Now when you run query to look for ANSI_PADDING on each column: 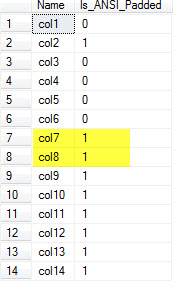 After all that is done, when you go to create the table via script in SSMS, you will get the following: