Send Us a Sign! (Contact Us!)
Show More Info
How many times this articles has been read? 292
This article has 2307 total words. (Including header) 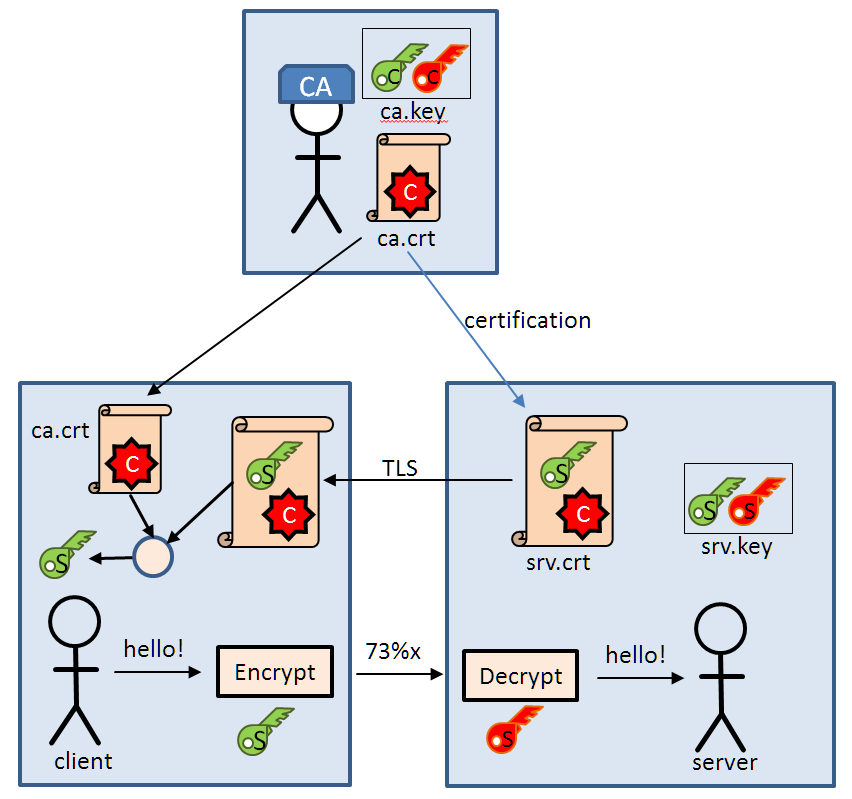 In your browser, you can tell when you are using a secure protocol, such as TLS, in a couple of different ways. You will notice that the "http" in the address line is replaced with "https," and you should see a small padlock in the status bar at the bottom of the browser window. When you're accessing sensitive information, such as an online bank account or a payment transfer service like PayPal or Google Checkout, chances are you'll see this type of format change and know your information will most likely pass along securely.

TLS and its predecessor SSL make significant use of certificate authorities. Once your browser requests a secure page and adds the "s" onto "http", the browser sends out the public key and the certificate, checking three things:

The two computers can then communicate using symmetric-key encryption. Once the session is finished, each computer discards the symmetric key used for that session. Any additional sessions require that a new symmetric key be created, and the process is repeated.

Back to the classic: Alice and Bob

First we have Alice and Bob.

They live far apart and love communicating with each other, but because they want to keep their conversations secret, they encrypt all their messages. Eve is fascinated by these two and is continually eavesdropping on them, but that's all she does: listen in, trying to work out what they're talking about.

Then there's Mallory. He not only listens and tries to work out what they're up to, but he's malevolent as well. He will alter their messages, delete them and substitute his messages for Alice's or Bob's, trying to fool them both that his messages originate from the partner. He is known as the man in the middle.

Back in the old days, Alice and Bob would use a shared key and an agreed-upon symmetric encryption algorithm. In 1981, the Data Encryption Standard (DES) was published publicly as a symmetric algorithm (that is, you encrypt and decrypt with the same key). Despite using what we might now think is a small key (only 56 bits), it took off and started the whole field of cryptanalysis.

Alice and Bob took to DES with abandon, but they ran into a problem: they needed a 56-bit key (preferably randomly generated) that they could share, but keep secret. Once the key was agreed on, all of their communications would be opaque to Eve and Mallory.

There was just one problem - how could they agree on a key? Alice couldn't send a key to Bob, because both Eve and Mallory would see it as she'd have to send it unencrypted. Even worse, Mallory could substitute another key entirely and send that to Bob. After that, Mallory could intercept messages from Alice to Bob, decrypting them with the real key, reading them, then encrypting them with the fake key and sending them on. The same thing would happen on the return journey. Alice and Bob's messages would be nowhere near secure.

There was nothing for it: Alice and Bob would have to meet in person and devise a shared key, making sure that they couldn't be overheard by Eve or Mallory. Of course, if the shared key was ever disclosed or hacked, they'd have to go through the whole rigmarole of travelling to meet up and decide on a key again.

The most important thing to realise here is that the secret between Alice and Bob is the key. If the shared key was ever discovered, the totality of the communications between them would no longer be secure.

With brute force decryption, you use a computer that tries every single key until one is found that decrypts the message (it assumes that the plaintext message is recognisable in some sense). When DES was first devised, PCs had only just entered the market and brute force cracking of a DES-encrypted message was infeasible. Nowadays, using a specially built computer, a DES 56-bit key can be discovered within a week on average.

Standard DES has been supplanted with variations (triple-DES) and new algorithms (AES) with longer keys, but for Alice and Bob, the same old problem is still present: how to agree on and exchange a key securely.

With public key cryptography, things are different. Public key cryptosystems use two separate keys: a public key and a private key. The cryptosystem (the most famous one is RSA, named after its inventors Rivest, Shamir and Adleman) uses special mathematical algorithms so that the encryption of a plaintext message and the decryption of that encrypted message use different keys.

The keys are related mathematically, but knowing one doesn't really help you discover the other (the process involves the factorisation of a very large number into two very large prime numbers - an algorithm that with current mathematical knowledge would take an inordinate amount of time to calculate).

Because there are different keys for encrypting and decrypting, these cryptosystems are known as asymmetric algorithms. This is how Alice would encrypt a message to send to Bob with a public key algorithm.

If the result is legible, he knows a couple of things with certainty: only he could read it (neither Eve nor Mallory could, since only his private key could decrypt it), and Mallory couldn't have slipped in a fake message since the original message could only have been encrypted with Alice's private key. So everything is well, and he and Alice can communicate with abandon.

All of a sudden, Alice and Bob's original problem with a symmetric encryption algorithm is removed: Alice just sends Bob a brand new 256-bit key encrypted using RSA in the manner I just described, and then they communicate using AES with that 256-bit key. They don't have to meet at all.

Sounds great, but what's the flaw? The flaw is this: how do Alice and Bob exchange their public keys securely? Alice can't send an unencrypted message to Bob containing her public key, because Mallory may intercept that message and substitute his own public key. (Ditto for Bob informing Alice of his public key.) If that did happen, Mallory would be in complete control of the message channel.

Let's call the two key pairs that Mallory generates, fakeAlice and fakeBob; Alice thinks fakeBob is actually Bob, and Bob thinks fakeAlice is Alice. Suppose Alice sends a message to Bob. She encrypts it with her private key and then with fakeBob's public key and then sends it.

Suddenly it seems we're right back to square one: Alice and Bob still have to meet in order to exchange their public keys. We're no better off than we were before.

In practice, this problem is solved by one more level of indirection: the CA or certificate authority.

But hold on, you may be asking, how do Alice and Bob know the CA's public key? Can't Mallory just intercept this and replace with his own public key?

Once Alice and Bob buy their digital certificates from a particular CA, they can send them to each other with impunity, in essence by trusting the CA. Alice can check Bob's certificate (and discover his public key) by decrypting it with the CA's certificate, and vice versa. Once that's done, they can send each other secure messages ad infinitum.

Now imagine that Alice is you, Bob is your bank, and you want to take a look at your accounts online and pay some bills. You certainly don't want Eve to see your account details, and definitely don't want Mallory to be fiddling with your transactions as you send then to your bank.

Before RSA and public key systems, this would have been nigh on impossible: you would have had to securely agree on a large key with your bank. In fact, the bank would have had to agree on (and store) a random-looking key for all of its customers and keep them safe from prying eyes.

The bank would have a nigh-on impossible task keeping the world's Eves and Mallorys from joining as employees and accessing all those private keys. But with public key cryptosystems, this all becomes feasible.

It is the basis of SSL (Secure Socket Layer) and TLS (Transport Layer Security). The latter is the newer version of the former, but everyone still uses the term SSL - although it does look a little different.

The first problem is that we normal people don't (usually) have a private/public key pair and a digital certificate that proves who we are (for a start, certificates are very expensive), so we have to approach things differently.

When you visit a bank's website, the bank's server will automatically redirect you to its secure site using the HTTPS protocol before you can log in. This results in your browser and the bank's site negotiating a secure channel using SSL protocol.

This negotiation goes a little like this (note that we have simplified it greatly). The browser sends a message stating what the latest version of SSL it can support and a list of symmetric algorithms it can use. The web server sends back a message with the version of SSL and the algorithm that will be used.

It sends its certificate as well. The client verifies the certificate using the known certificates that came with the browser; in other words, it checks that it has been signed by a trusted CA and that it hasn't expired (the date).

If the certificate is valid, the browser generates a one-time key for the session, encrypts it with the server's public key (it's part of the certificate), and sends it to the server. The server decrypts the key, then uses that key together with the agreed symmetric algorithm for the rest of the session.

Let's take stock. Your browser is certain that the server is who it says it is (your browser is trying to access YourBank.com, and the certificate says it's valid for YourBank.com - and the CA agrees). The browser has generated a cryptographic key that will be used for one time only: this particular session. It'll be thrown away after you log out.

The key was sent encrypted with YourBank.com's public key, which only YourBank.com can decrypt with its private key. There are a couple of other messages sent that check your browser and the web server have agreed on the same key (if anything went wrong, the session is dropped).

Once YourBank.com has presented you with a login screen (which will be sent over HTTPS, if the bank knows what it's doing) and you've filled it in, it'll know who you are. Your id and password will have been sent encrypted over the secure channel that you've both established. Eve and Mallory are completely out of the loop.