Hypertext Transfer Protocol Version 2 (HTTP/2) is the latest version of the HTTP protocol, published as an IETF standard in RFC 7540 in 2015. The focus of the protocol is on performance; specifically, end-user perceived latency, network and server resource usage.

In 2015, Internet Engineering Task Force (IETF) release HTTP/2, the second major version of the most useful internet protocol, HTTP. It was derived from the earlier experimental SPDY protocol. Main goals of developing HTTP/2 was:

HTTP/2 can send multiple requests for data in parallel over a single TCP connection. This is the most advanced feature of the HTTP/2 protocol because it allows you to download web files asynchronously from one server. Most modern browsers limit TCP connections to one server. 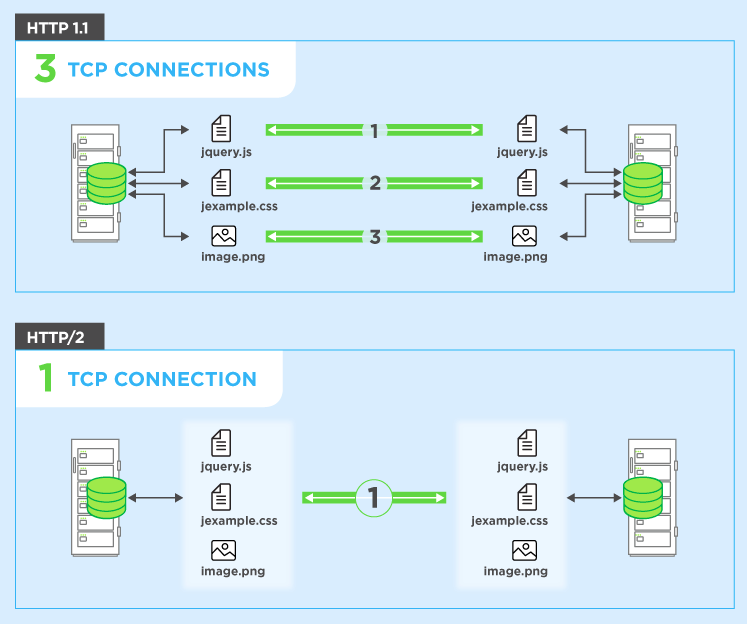 HTTP/2 compress a large number of redundant header frames. It uses the HPACK specification as a simple and secure approach to header compression. Both client and server maintain a list of headers used in previous client-server requests.

HPACK compresses the individual value of each header before it is transferred to the server, which then looks up the encoded information in a list of previously transferred header values to reconstruct the full header information.

One major goal is to allow the use of a single connection from browsers to a Web site. The protocol is backward compatible, so HTTP methods, status codes and semantics are the same as for previous versions of the protocol. Nginx has HTTP/2 support since version 1.9.5.

To enable HTTP/2 in Nginx you will need to fulfill the following requirements:

Anything lower than version 1.9.5 of Nginx will not yet have HTTP/2 support and you will be greeted with the following error message:

Even though HTTP/2 does not require encryption, developers of two most popular browsers, Google Chrome and Mozilla Firefox, stated that for the security reasons they will support HTTP/2 only for HTTPS connections. Hence, if you decide to set up servers with HTTP/2 support, you must also secure them with HTTPS.

To enable HTTP/2 in Nginx, we have to add the http2 parameter to the listen directive in our virtual host:

And reload your Nginx configuration:

Here is the minimal virtual server configuration that can be used to enable HTTP/2 in some virtual host:

To check if your server supports HTTP/2, you can use your browser dev tools or Nginx log files. The below is a screenshot from Google Chrome browser that shows HTTP/2 in action on https://example.com domain.

You can also use Nginx $http2 embedded variable to see negotiated protocol. This variable will log: “h2” for HTTP/2 over TLS, “h2c” for HTTP/2 over cleartext TCP, or an empty string otherwise in the Nginx access log if configured to do so.

And that’s all there is to enabling HTTP/2 on your Nginx server.

The location of the Nginx block file is the only difference between CentOS and Ubuntu and it depends also if Nginx has been built from source or not with custom paths.

To edit the default Nginx server block on CentOS you should look into the /etc/nginx/conf.d, for example, directory.

Once again, check if there are errors with the configuration, save and close the file, then restart the Nginx service using the command below:

Testing If HTTP/2 is enabled

Now let’s test whether HTTP/2 is running and enabled on our Nginx web server. In your terminal, execute the command below:

In our case, it shall be: 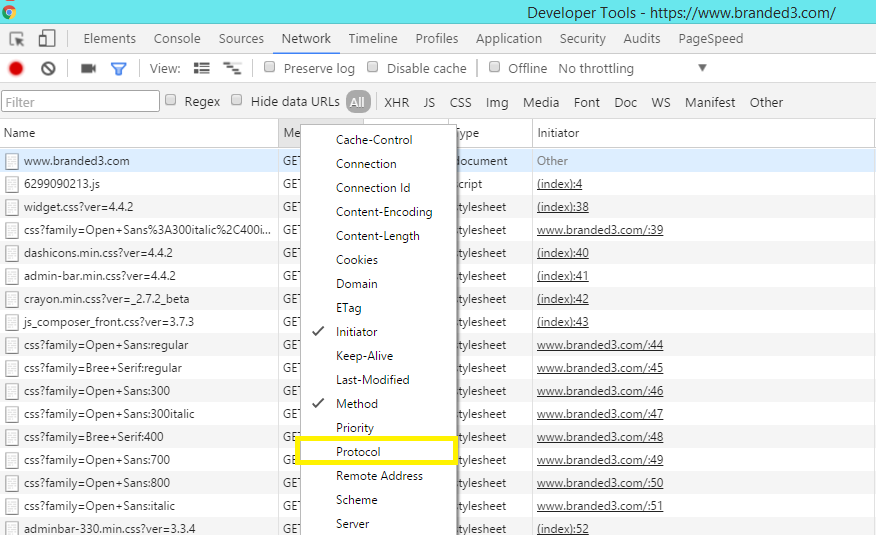 This will add a new protocol column to the Network tab and let you know which HTTP protocol version each resource (HTML, CSS, JS, font, etc.) is being served on.

From there you will be able to identify if any of your own internal resources are being served over HTTP/2. As you can see from the screenshot above, the website is on HTTP/2, but some of the CSS and JS files from Google are still on SPDY.