A file is signed with a certificate. A digital certificate is usually issued by a Certification Authority (CA). These are important things to consider, so it better to focus these before going on with the Powershell code signing process for scripts.

But before going directly on the steps to digitally it is better to know which are the basic security levels available in a Powershell environment.

PowerShell is configured to run in its most secure mode by default. This mode is the "Restricted" execution policy, in which PowerShell operates as an interactive shell only. The modes are:

Run the following from a PowerShell prompt (AllSigned is an example):

This command requires administrator privileges. Changes to the execution policy are recognized immediately.

If you're reading this for the first time, PowerShell may have just displayed the error message as you tried to run a script:

The default execution policy of PowerShell is called "Restricted". In this mode, PowerShell operates as an interactive shell only. It does not run scripts, and loads only configuration files signed by a publisher that you trust.

If your scripts are specific to your internal use, you maybe able to self-sign. You can also buy a code signing certificate from another certificate authority if you like.

For a self-signed certificate, a designated computer is the authority that creates the certificate: the benefits of self-signing include its zero cost as well as creation speed and convenience. The drawback is that the certificate must be installed on every computer that will be running the scripts, since other computers will not trust the computer used to create the certificate.

To create a self-signed certificate, the makecert.exe program is required, which is however available on any Windows 10 system.

We have two approaches available to create self-signed certificates, using makecert.exe utility or using the New-SelfSignedCertificate cmdlet directly in Powershell.

Open Windows PowerShell and run the following One-Liner to create a signing certificate.

Now the certificate must be exported and then imported into the Trusted Root Certification Authorities and Trusted Publishers. 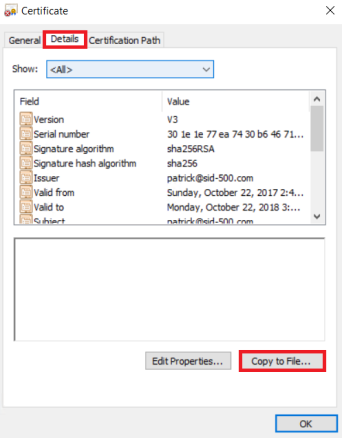 Do not export the private key. No need for.

Save the file wherever you want and then import the certificate to the Trusted Root Authorities and Trusted Publishers.

Instead of Powershell (but it is recommended) we can use makecert command to create self-signed certificates. The following command will create a local certificate authority for your computer (you will be prompted for the private key password setup):

Now we will need to run the following makecert command from a Command Prompt again. It will generate a personal certificate using the above certificate authority (you will be prompted for the private key password created and set before):

After the above steps, verify from Powershell that the certificate was generated correctly:

Below are listed the most common OIDs needed for makecert to speficy the purpose of the new certificate to be used with the -eku switch:

Now, we can proceed signing the Powershell code (this is valid for both .ps1 and .psm1 files) by using the Set-AuthenticodeSignature cmdlet in Powershell, as follows:

After that, we will get an output similar to this:

As you see, the status is valid, so the signing was successfully done. Please note that we recommend that you supply also the TimeStampServer parameter (not included in the above example). This will make sure the script works even though the certificate that signed it is expired. It will tell the system that the code signing certificate was valid at the time of signing.

If you do not use the TimeStampServer parameter, the script will stop to work when the certificate used for signing expires. There are multiple online sources for timestamping out there.

The signing process actually modifies the end of the script with a signature block. For example, if the demo-script1.ps1 consisted of the following code:

After the script is signed, it looks like this:

For testing your script, make sure the execution policy allows the running of .ps1 scripts.

Remotesigned, AllSigned and Unrestricted are your friends. If the policy is set to Restricted then set it – for this testing environment – to AllSigned.

If you get the following error/warning, during the starting of the execution of the script, then you might have forget to import the new certificate to the Trusted Root Certificate Authorities.

While, if you must confirm the execution of your script, then it looks like the following text:

This will mean that we have not still imported the certificate to the Trusted Publishers store.

PowerShell will be unable to validate a signed script on computers other than the one where it was signed. Attempting to do so gives an error:

Signed scripts can be transported by exporting (from original computer) and importing (to the new computer) the Powershell certificates found in the Trusted Root Certification Authorities container. Optionally, the Trusted Publishers can also be moved to prevent the first-time prompt.

Login on the target machine as the user under which scripts will be running. Open MMC and add the Certificates snap-in for the current user, locating the Trusted Root Certification Authorities container.

Expand the container to find the Certificates store. Right-click on it and select All Tasks, Import. It is recommended to import the certificate also in Trusted Publishers store.

Your signed script should now run on the new computer. Note that Powershell will prompt you the first time it’s run unless you also import the Trusted Publishers certificate.

If we need to deploy the script in a domain environment, we will have to use the Group Policy Management Console, so creating a new policy, selecting the domain, right-clicking it, and clicking Create a GPO in this domain, and link it there.

Once imported the certificate for our Powershell code into Trusted Root Certification Authorities and Trusted Publishers, we will be alble to confirm this by looking inside the relative certificate node in the Group Policy Editor .

So, the next time the policy is updated on computers in your domain, they will add this certificate as a Trusted Publisher and Trusted Root Certification Authority. You can now run scripts signed by this certificate without being asked if the certificate is trusted or not.